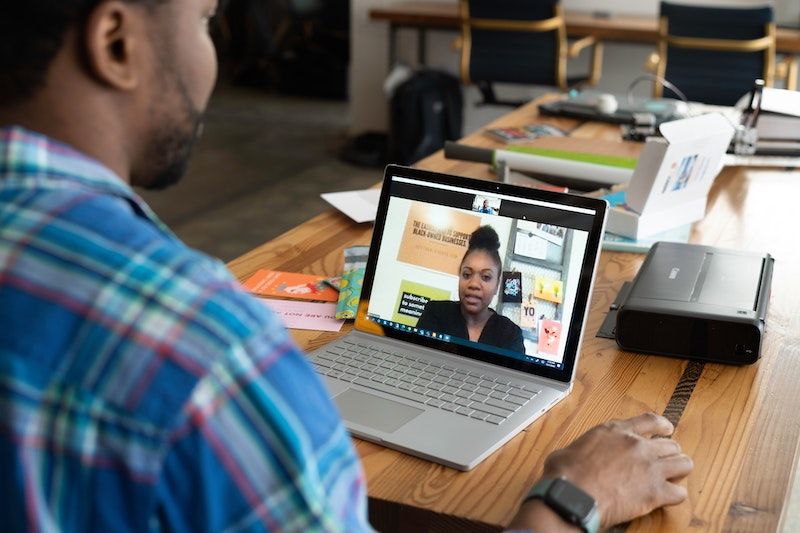 The “We” in Digital Spaces

Interesting experiences often come unexpectedly. For more than a year, like many people, I've spent not only my nights but also my days physically in my bedroom and digitally in video conferences. Variety comes in the form of various tools—a lot of Zoom, a bit of Jitsi, more and more BigBlueButton, sometimes Teams, sometimes Slack, and less often Instagram or WhatsApp calls. What these tools have in common is that a video tile opens up with my picture and next to it other video tiles with the pictures of other participants in the conversation. Over the past year, we have adapted our way of working and talking to the logic and look of these platforms.

For some time now, I've also been visiting other digital spaces. One of these spaces is called spatial.chat and strives to offer workshop or conference experiences that are as close as possible to face-to-face formats. Similarly functioning platforms include gather.town, wonder.me, or workadventu.re - digital spaces where participants can take more ownership of their encounters and control their digital experiences.

A workshop on spatial.chat, which was conducted by an international team, dealt with the topic of "diversity and inclusion in digital spaces" and methodologically borrowed from experiential education.

Since then I have been thinking about the ways in which we have appropriated digital spaces, how we have changed in them, in the way we work, but also in the way we interact in them.

Over the past year we've learned to mute ourselves, write questions in the chat, and handle that surprised and somewhat wistful feeling when we're brought back from the breakout room. Because there is only a few minutes for small group exchanges, the kind where you're allowed to say real words and not just give a thumbs up emoji in response to questions in the main room.

"Everyone please mute yourselves and we'll all have a better experience" is probably the most spoken phrase of the year. We're all conditioned to believe that background noise from our living rooms at home has no place in meetings or conferences. Rightly so, because depending on the microphone settings and the number of participants, it can quickly lead to auditory chaos. But it also means that we somehow can't cope with the normal sounds of life. From one tile, the speaker's clear announcements resound in the loudspeaker; from the others, breathtaking silence booms.

In contrast, when workshop leaders in Spatial.chat asked everyone to turn on their megaphones and say something, chaos ensued, as well as the unconditional desire to immediately turn off the microphone again. The parallel noises were simply unbearable.

Self-efficacy in the digital space

As a participant, I can sit back comfortably, because I don't have to more than actively join the breakout rooms if necessary or—if I have the necessary digital expertise—make the view of the speakers and the plenum pleasant for me. Here, however, the video conferencing systems have learned a lot. Whereas a few months ago we were almost completely at the mercy of the meeting hosts as far as our own freedom of movement in the digital video conference, self-efficacy is now significantly strengthened with every Zoom update. Wandering independently through breakout rooms, pinning videos autonomously, and arranging video tiles independently creates a sense of reclaimed autonomy in the digital space. That's worth a lot. But if all that is too much for you, you can continue to hope that the "mute all" button will be operated right at the beginning and that you won't even be expected to turn on the camera in larger meetings. Because we know by now what zoom fatigue means and that the constant self-view in video calls makes people more self-critical.

We've learned to do even more things at the same time. During face-to-face meetings, you can't write emails on the side, no matter how relevant or irrelevant the meeting is to your work. The new digital meeting culture allows us to turn off the camera, listen with one ear to see if there's anything important for us, or at least to keep up with what's going on with the others. At the same time, we can do whatever is important to us: work, answer children's questions, make dinner, do yoga.

In digital spaces like spatial.chat, which constantly require action and interaction from us, "doing other things on the side" does not work. In the course of the session, this was repeatedly exposed for those who, for understandable reasons, could not or would not follow the instructions for digital movement because their attention was required elsewhere in parallel.

The ego in the digital space

During evening events, especially when one is at home with children, it is perhaps precisely the achievement of digital communication and interaction to be able to do things at the same time and not have to decide. So breaking down barriers for all those who would otherwise have to decide against participation in educational opportunities and work to do other things.

This is time sovereignty, which is how we work and learn in digital spaces today. This means that we must all once again become aware of other people’s uniquely different situations. Some sit alone in their rooms, others share their room and bandwidth at home with other people, and others look after small children.

It also means that for some it’s morning, for others a lunch break, and for others evening—creating different energy levels and different attention spans. Moods only become visible when they are made explicitly visible. Being alone in the physical while being together in the digital leads to the individual situation having much greater influence on being in the digital.

The good tone in the digital space

We know, of course, that for privacy reasons alone, open source software is better than the video conferencing software created by private U.S. providers. Nevertheless, presumably everyone secretly longs for Zoom when access to the right microphone and camera has to be permitted for the tenth time, or because one has been kicked out of the BigBlueButton conference again. Or when an already advanced participant in a Jitsi conference sticks black tape in front of her camera and renames herself "..... reconnecting" because, unfortunately, the tinny croak of what is supposed to be the sound dominates the content so much that the latter just doesn't come through.

There is little doubt that the technical quality of virtual events has an impact on our attitude regarding the content being negotiated. When you can’t follow the conversation because of poor sound, you may feel little desire to think further about what you've heard. Good sound is therefore a prerequisite for a good conversation—both in terms of technical quality and the way people interact with each other. Investing in high-quality open source software that is available to the community should be a vested interest of our democracy.

Opportunities in the digital space

On the one hand, digital infrastructure must offer framework conditions for substantive discourse, as a place for exchange and negotiation. Its attributes, such as independence of time and place, also offer the opportunity for encounters that might not otherwise take place in the physical. Digital spaces also have a direct influence on content. Those who have access to the digital space have access to the discourse. This can be completely disconnected from traditional power relations, which are certainly more difficult to break in physical spaces.

Therein lies a great opportunity. If we meet as equals in digital spaces, regardless of social background, age, gender, or roles defined for us, then good ideas for our society may prevail. Instead of ideas from those who, because of their privileges, claim the right to decide for others and have little interest in changing power relations.

In order to conduct these new discourses, in addition to the digital infrastructure and promotion of new creative and digital tools, one thing is needed above all —political education and media competence. In order to participate in a self-determined and responsible way, it is important that we can act safely in spaces that we are supposed to help shape, both online and offline. We must be allowed to have genuine democratic experiences in which every voice and every opinion is heard and reach a democratic compromise together. We must be able to enter into discourses that are relevant to us without the outcome already being fixed. This requires knowledge of our creative leeway in the form of our political rights, as well as the skills to navigate public and semi-public discourse spaces with confidence. Since these spaces have been largely digital even before the pandemic, it is therefore a task of society as a whole to establish the following: The We in Digital Space!