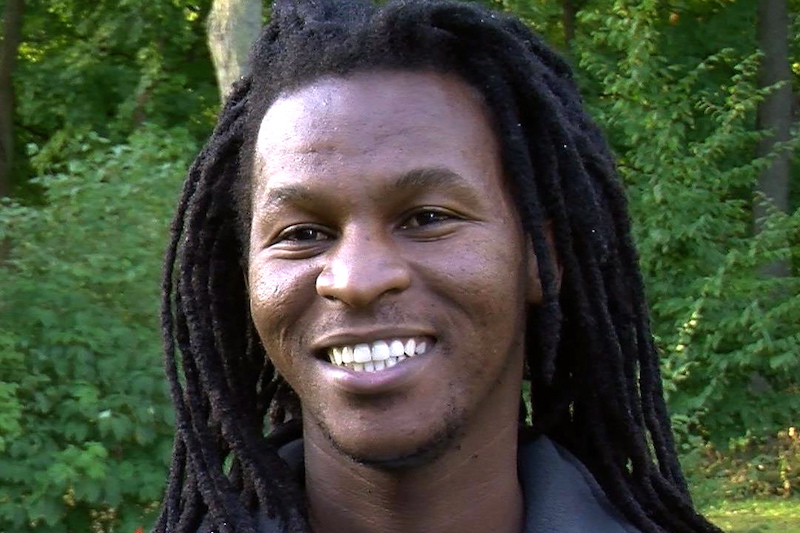 Growing up in South Africa during the Apartheid era, Thozi Ndlazi is no stranger to discrimination. Born in East London, South Africa, Thozi moved to Cape Town at the age of five. He was raised by a single mother with three other brothers, and the village he inhabited was predominantly black. Segregation was not only something that Thozi experienced but something that he learned. It was not uncommon to receive lectures in school teaching the children to dislike other races. In grades 11 and 12, Thozi joined a youth organization that brought youths of different backgrounds and ethnicities together by teaching toleration and cooperation. Thozi remembers that this was, at times, challenging due to his preconceived beliefs.

In 1998, Play for Peace trainers came to run a session. At the time, Thozi was not sold on PFP methodology, seeing it as a group of Americans coming to spread propaganda. When PFP returned, with Craig Dobkin being a memorable trainer, Thozi began to see something in PFP. Thozi’s interest was now piqued, and in 1999 he became part of the PFP youth facilitators for the World Parliament of Religions in his native Cape Town. Thozi was chosen to represent PFP in Youth Next Generation and subsequently met His Holiness Dalai Lama va842kt.

Play for Peace has substantially impacted Thozi’s life. Through PFP, Thozi was given an internship opportunity. Thozi traveled to Colorado and worked as a coordinator of after school programs, and through these programs he trained youth facilitators to do play sessions in their school. Thozi saw the need to spread PFP methodology in his home country because a huge gap still existed between different races and ethnic groups. Upon his return to South Africa, Thozi started a youth organization with other PFP youth facilitators and started running youth programs using PFP methodology.

Thozi currently splits his time between South Africa and upstate New York. Spending most of his time in South Africa, Thozi runs lots of diversity camps and leadership development programs all the while using PFP methodology and centering on the values of collaboration, trust, compassion and tolerance. Each summer, Thozi travels to Upstate New York to a summer camp where he runs their adventure program using some PFP activities, which the kids absolutely love! Four years ago Thozi travelled to Kissi, Kenya, with Lauren Evans to open a PFP club and train youth trainers. A huge eye opener and a place of growth for the two, Kissi taught Thozi immeasurably about the people and culture of Kenya. He hopes to possibly go back or perhaps to other parts of East, West, and North Africa to participate in more training.

While PFP has greatly affected the turn of Thozi’s life, he also recognizes how he has been changed as a person through PFP. He has grown as an individual, shedding those biased views from his youth. In his language, there exists a saying, “Umntu, Ngumntu Ngabantu.” This translates to “a person is a person through others,” something which Thozi strongly believes and lives by.

Want to meet Thozi? Join us at the 2017 Feast For Peace on Thursday, March 9! Tickets are still available!