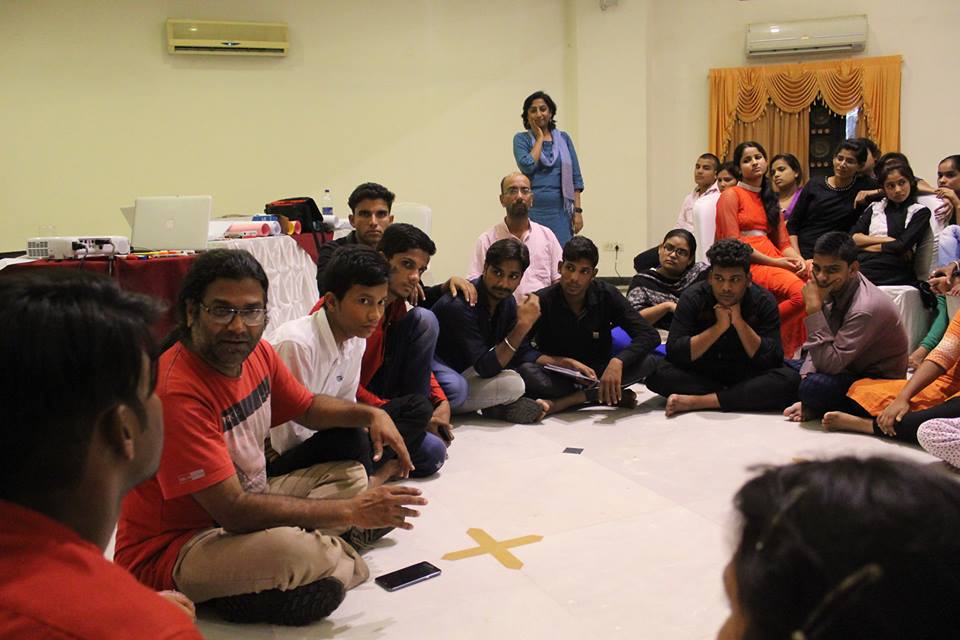 Day 3: Discussions on Gender and Patriarchy in Jaipur – Part 1

The talk on sex and sexuality dispelled the myths and mystery about the human body, our sexuality and the reproductive and sexual organs.

Continuing the conversations from Day 2 about gender, equality and patriarchy, Play for Peace trainers Swati Bhatt, Agyat Shunya,  Ajat Shatru and Abha Jeurkar along with Anand Pawar, Executive Director of SAMYAK, spoke to the participants about practicing what they were learning. Anand made a point of using words in the conversations that challenged gender norms. The leaders first showed clips of a film and asked the participants to spot language and gestures that they experience from socialization of gender. It was a valuable exercise as the participants looked critically at portrayals by the media and some felt empowered when they were able to spot patriarchy or socialization. Next Anand talked about the difference between the terms “sex” and “sexuality”. Often people view sexuality from a narrow lens and limit it to the reproductive organs. He explained how our brains are the most critical organ in determining our sexualities. Also, sexuality spans several areas of our private and public life, including literature, music, art, paintings, ideas of beauty etc. Sexuality is not limited to the mere act of sex. The talk on sex and sexuality enabled the next discussion, which was designed to dispel the myths and mystery about the human body, our sexuality and the reproductive and sexual organs. This subject is an uncomfortable one to discuss in public but lack of information is a source of discomfort and uncertainty for many young people. Anand asked the participants to write down any questions they had about “sexuality?. The option to inquire anonymously encouraged many to reveal their pressing questions. Some of the questions made Anand realign his discussion since many of the questions were more basic than he had assumed. Next, Anand split the men and women into separate groups and asked them to create a body map and mark different organs, including those organs we don’t talk about. In the first version of the man’s body map, Anand pointed out the gaps and provided them information about the missed reproductive and sexual organs. He also discussed and dispelled many myths about the male bodies. In Part 2 of this blog post, we will tell you what Anand and the participants discussed about women’s bodies and how sexuality is intricately linked to gender roles and identity.