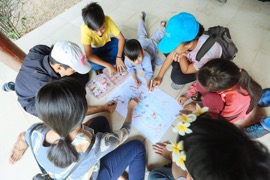 During Earth Week, A New Day Social Work Group, a Play for Peace club located in Vietnam, held a session where the children role played. The kids were asked to act out a scenario that featured a girl playing with her friends and taking a very long shower afterward. Then the kids were asked whether this was good or not. They concluded that it was bad because so much water was being wasted in the long shower. The children then shared their ideas for why water is so important for human beings and the earth. Then a discussion was held through images. Volunteers showed photos of water - from rivers, pools, streams, lakes, etc. Looking at the photos and describing what they saw in them, the kids analyzed reasons why water was so polluted, how to recognize polluted water, and how to save clean water. This discussion led to an activity where the kids drew out their water-saving ideas. It was a great session and the children learned how important water is to people and the earth.