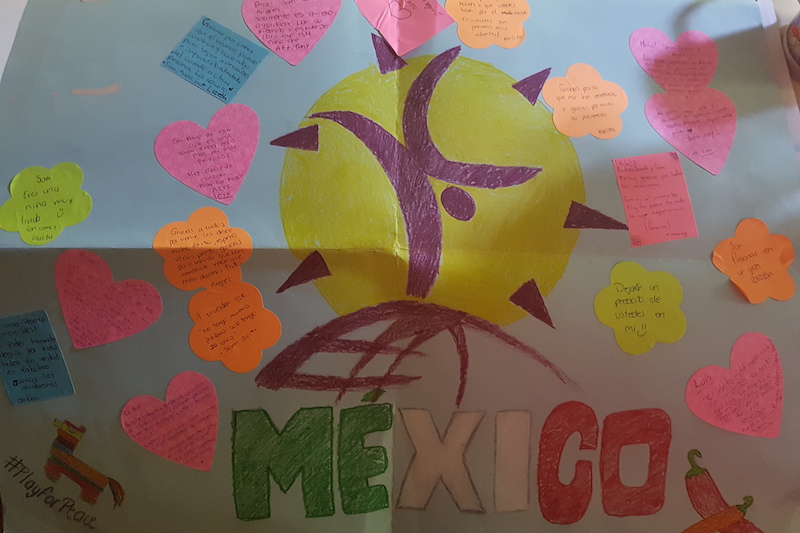 Play for Peace Heads to Mexico

“It was such a warm welcome and I left very impressed. We left a little piece of our hearts in Mexico."
—Sarah Gough, Play for Peace Executive Director

On their second day in Mexico, they hosted a conference for around 200 of the UBAM’s students to let them know about Play for Peace's work. They encouraged the students to seize any possible chance of getting involved in community service and then crowned the presentation with a Q&A session.

Though it was a great event, Sarah says the best part was that, “The Mexican club was there in the first row with their Play for Peace t-shirts on. It was awesome to see.” But of course their day did not end there. The whole university was thrilled to have them there.

"The students were so excited and nervous to talk with us!” Sarah shared, before explaining the communication students set up a sort of press conference and interviewed them both for the University’s radio and TV stations. Surprises and Mexican warmth were not over then; the tourism students cooked a three-course meal described as “amazing and elegantly presented” by the whole Play for Peace delegation. Sadly, we have no photos to share with you from this incredible gesture because hunger took the best from whoever was in charge of the camera, but it’s not like we can blame them, right? Mexico was already on its way to make a great impression by the end of the second day.

Sarah was thrilled by the warm welcome, and “left very impressed with how the university used our visit as a learning opportunity for their students."

Their third and fourth days were used for all-day trainings, level 1 and 2 respectively. In spite of the heat, the group was committed and focused throughout the whole event. During these days, the group received special visits from several members of the community with strong bonds with Play for Peace’s philosophy and community service groups. Advancing through the week, they had the chance to meet with Samantha Flores, a well-known Trans activist in charge of an orphanage for children with HIV, which served as the last day's destination for the PFP delegation. The team performed a Practice Peace session at the orphanage.

“All ages were mixed and there were many physical, emotional and developmental challenges," Sarah shared. And though they were only able to follow their original plan for 30 minutes, "the youth facilitators did an amazing job under such difficult circumstances." The youth facilitators had traveled for over two hours to get to the orphanage, using their own funds to get there. To say they were an incredibly committed group does not do them justice.

After such an emotional and intense week, it was time to say goodbye but not completely since the whole delegation agrees in one more point. According to Sarah, “We left a little piece of our hearts in Mexico.”