Established in 2011, A New Day Social Work Group (AND) is Play for Peace’s club in Vietnam. AND has worked with a variety of communities, including HIV-infected children, LGBTQs, people with disabilities, and immigrant young workers. However, AND specializes in working with children in rural areas, where many struggle with social issues. According to the Ministry of Labor, Invalids, and Social Affairs in Vietnam, from 2011 to 2015, there were 5,300 cases of sexual abuse in children. The Ministry of Education and Training Vietnam also reported that there are 1,600 cases of violence in school every year and one out of every nine schools deal with school violence. And these problems are more serious in small Vietnamese villages and communes.

Hence, AND needs to be a part of solution and aims to push ideas into action for a better childhood for Vietnamese children. Between 2012-2016, they implemented two projects, For a Better Childhood 1 andFor a Better Childhood 2, and as a result, more than 220 children in rural areas benefited from the education projects. Now the group is working on For a Better Childhood 3in Thuan Thanh—a small commune in the Mekong Delta—and will implement the project with the local Vietnam Women’s Union in order to teach life skills to 100 vulnerable children.

As with every project, AND works very hard to fundraise for their projects—seeking more than $5,000 is a challenge for any independent volunteer group. However, after four months they are thrilled to be partnering with LUMEN, a local choir club, whose values and goals are in line with their own. LUMEN provided the volunteers that AND needs to complete their project and has been very willing to conduct fundraising events. 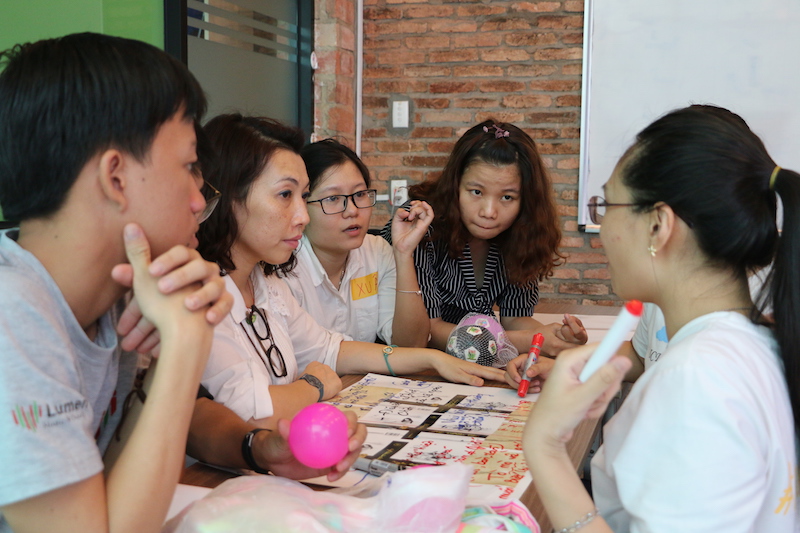 To acquaint the new volunteers with how to work with the children based on Play for Peace methodology, AND did two training programs with the volunteers. The first training, “Joy of Play,” was conducted on August 19, 2018, for 30 adult participants with a variety of backgrounds. While the majority of participants were new volunteers committed to working on For a Better Childhood 3, some wanted to learn how to work with their community more effectively. The training included an introduction about AND and Play for Peace, an explanation of cooperative games and how to lead them, and a comparison of social work and charity, which helped them understand how charity is useful in emergency situations and social work is more sustainable in terms of providing the necessary tools and knowledge to build community.

The second training program, “Facilitation Skills,” was conduct on August 26, 2018. This training focused on understanding children and how to conduct educational activities. AND invited a psychologist who has worked with children for more than 15 years to share necessary specific knowledge about “who our children are.” Volunteers learned about variances in attitude, behavior, and thought between children of different ages, how to manage children with special behaviors such as ADHD and Autism. The model of Behavior Empowering Support Techniques or B.E.S.T was also introduced, which AND members explained has been used to solve many difficult cases efficiently. In addition, volunteers were asked to create lesson plans based on specific topics in the project and then had to practice their plans. This part was crucial because some of the volunteers had the potential to become activities leaders in the future. Practicing and receiving feedback helped them to become more confident.

According to AND, participants in the two training programs were smart, passionate, energetic, and willing to change. At the beginning, they were quiet and did not work well in teams. Soon, they communicated more, laughed more, and applied feedback in order to improve themselves. AND is confident that this talented team will be ready for the project. The first program with children in local will be conducted next month.

This year is a turning point for AND, as it is the first time the group has worked in cooperation with a local partner to implement a project with a sizeable budget. AND knows that Play for Peace is always there for support and is proud to be a part of the organization.